The “Difference” between the Canadian Lynx and Bobcat

Posted by greatcatsoftheworld on April 24, 2012
Posted in: Uncategorized. 6 Comments 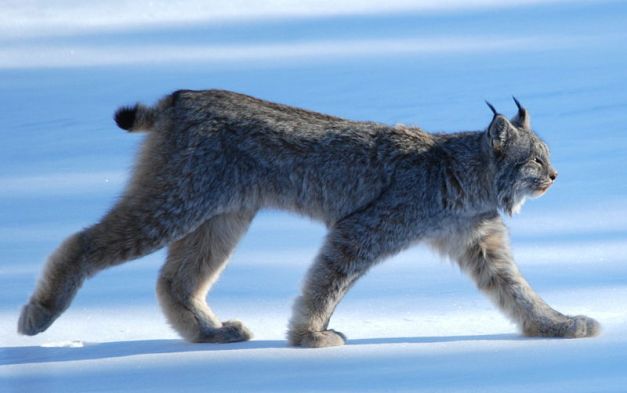 HowStuffWorks “What’s the difference between a bobcat and a lynx?”

Believe it or not, there’s a method to the madness. While bobcats and lynxes are separate species, they do belong to the same genus, which, coincidentally, happens to be the Lynx genus. There are four different species belonging to this group — three of which share the family name: the Eurasian lynx, the Spanish (or Iberian) lynx and the Canadian lynx. The fourth member, the most common cat native to North America, is the previously mentioned bobcat.

The Lynx genus, with its four species, has the largest range out of all the cats. The Eurasian lynx (the most numerous and widespread of the four species) can be found throughout Western Europe and Northern Asia, while the Spanish lynx (the rarest of the four) is found only in Spain and Portugal. The Canadian lynx lives primarily in Canada and a handful of northern U.S. states including Maine, Minnesota, Montana, Wyoming and Washington.

While the three species bearing the family name have the bobcat outnumbered in terms of global spread, the bobcat dominates the continent of North America. That’s because the lynx prefers forested areas since that’s where its main source of food, the snowshoe hare, lives. The bobcat tolerates a more varied habitat — from marshes and swampy areas in the southern part of the continent, to desert and scrub in the western regions to mountainous, forested areas in the north. The only area where the Canadian lynx and bobcat coexist is along the U.S.-Canada border.

Geography isn’t the only difference between bobcats and lynxes. Learn how to tell them apart by taking a quick glance at their ears, coat, feet and tails.

Since even the three species of lynx vary somewhat in regards to size and appearance, it can be difficult to make any wide generalizations about differences among them and bobcats. For instance, a subspecies of Eurasian lynx (called the Siberian lynx) can weigh up to 84 pounds (38 kilograms) — much more than the average lynx weight of 18 to 60 pounds (8 to 27 kilograms)]. Nevertheless, differences do exist.

To begin with, the bobcat looks a bit more like an overgrown house cat than a lynx does. With extra-long tufts of furon its ears and a shaggy mane of fur around its cheeks, the lynx takes on an otherworldly appearance. The long black ear tufts, which can grow to be almost an inch (2.5 centimeters) long, act as excellent hearing aids, enabling the agile cat to pick up on the soft footsteps of its prey

A lynx also has larger feet and longer legs than a bobcat to help it navigate the deep snow common in its range. Its big, furry paws act like snowshoes to help this feline chase down food in the winter. Much of the time, that food consists of snowshoe hares. Anywhere from 60 to 90 percent of the diet of the Canadian lynx is made up of hares

The bobcat has a more varied diet than its rabbit- and hare-loving cousins, supplementing with small prey like birds and mice. The stealthy cat can also bring down larger animals, like deer, with a pounce spanning about 10 feet (3 meters)

­It’s a good thing bobcats don’t have the same attraction to snowshoe hares, since their smaller paws wouldn’t fare as well in the snow. Their coats, too, are shorter with more spots than those of lynxes and range from light gray to the more common brown. Lynxes, with the exception of the spotted Spanish lynx, lack much of a pattern on their long, thick, mostly gray fur.

Of course, an article on bobcats wouldn’t be complete without mentioning their short, rounded tails that appear to be cut, or “bobbed.” While both cats have the characteristic haircut-gone-awry type of tail, the bobcat’s is banded with black stripes. It’s also black at the top of the tip and white at the bottom, while the lynx’s tail lacks banding and is completely black at the tip.

A final way to spot the difference between bobcats and lynxes deals with behavior. Although both species (barring the larger Spanish lynx) are roughly the same size, bobcats seem to have more of an attitude. They’ve even earned themselves the nickname “spitfires of the Animal Kingdom” because of their fierce hunting style and bold behavior.

6 comments on “The “Difference” between the Canadian Lynx and Bobcat”